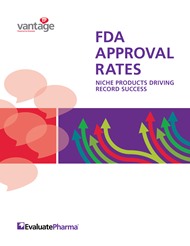 A focus on hard to treat or specialist diseases is set to result in record post-launch sales for new drugs in 2013, according to newly-released report, “FDA Approval Rates: Niche Products Driving Record Success,” from  EP Vantage, the editorial arm of Evaluate.

Although the total tally of approved drugs and biologics for 2013 is not forecast to match last year’s record of 43, the combined US sales for this year’s approved products could surpass $18 billion, 5 years after launch. The report, based on market intelligence and analysis from EvaluatePharma, can be downloaded by clicking here.

• Of the 27 drugs approved so far, combined fifth-year US sales are forecast to reach $13.9 billion.

• If approved in 2013, Gilead Sciences’ sofosbuvir stands to become this year’s most valuable new molecule, with fifth-year US sales estimated at almost $3 billion.

“Increased efforts on the part of FDA to speed up drug development and also companies choosing to expand into rare diseases or niche patient populations is having a big impact on productivity,” said Lisa Urquhart, EP Vantage Editor. “One example of this is the earlier-than-expected approval of Roche’s Gazyva, which was the first drug to reach the market under the breakthrough therapy designation scheme. We have also seen the approval of big ticket drugs such as Tecfidera this year and are still waiting one of the industry’s biggest drugs, sofosbuvir. Barring any upsets this will make 2013 a year to remember in terms of future blockbuster sales.”