Adaptimmune Announces Award of £2.1 Million from the Biomedical Catalyst Fund 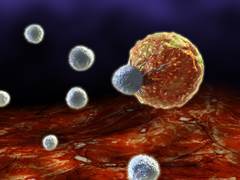 Adaptimmune has been awarded a grant of £2.1 million from the Biomedical Catalyst Fund, managed by the UK’s innovation agency the Technology Strategy Board and the Medical Research Council. The prestigious award will expedite the development of Adaptimmune’s second engineered T cell therapy programme into the clinic in triple negative breast cancer.

Adaptimmune engineers patients’ T lymphocytes to target and kill cancer cells when re-infused into the body. Its approach is focused on engineering increased affinity T cell receptors (TCR), the molecules on the surface of cytotoxic T lymphocytes that are naturally designed to recognize cancer cells. The company already has one T cell receptor programme in multiple cancer trials in the USA, with promising initial results.

The funding award will be used to expedite Adaptimmune’s second clinical programme with a new TCR to enter the clinic in the UK. The award will support preclinical testing and regulatory approval for an initial pilot trial with a new TCR targeting an undisclosed protein found to be highly expressed in some forms of breast cancer and other cancer types. The trial is planned to start in 2015.

David Willetts, Minister for Universities and Science, said: “Britain has a world-leading life science cluster and Adaptimmune is a classic example of an innovative bioscience company that the Biomedical Catalyst Fund is designed to support. Its personalized therapy for cancer developed over 15 years in Oxford represents a potential breakthrough in cancer treatment for thousands of patients.”

Adaptimmune’s unique approach relies on the ability to fine-tune the affinity of the T cells to recognize the small protein fragments from intracellular cancer-specific proteins presented on the cell surface. This novel class of cancer targets cannot be bound by antibodies or chimeric antigen receptor T cells and natural affinity T cell receptors fail to bind effectively to cause a killing response. Adaptimmune has a pipeline of T cell receptors recognizing such targets and the funding award comes at a time when the company is significantly increasing its activities in the UK as well as the US.

James Noble, Adaptimmune’s Chief Executive Officer, said: “We are delighted to be announcing the Biomedical Catalyst Fund support for our next pipeline TCR and its path towards the clinic in 2015. We have a wide portfolio of cancer targets to be exploited in this way and our objective is to develop this pipeline of TCRs as rapidly as possible for the benefit of patients.”

Dr Bent Jakobsen, Adaptimmune’s co-founder and Chief Scientific Officer, said: “The ability of T cells to track down and kill cancer cells is one of the most powerful weapons we can bring to bear on the disease. We have spent 15 years optimizing and testing T cell receptors here in the UK and the award from the Biomedical Catalyst Fund provides an important boost to expand the pipeline for the benefit of UK patients.”

Grants from the UK government-backed Biomedical Catalyst Fund totalling more than £120 million have been awarded to more than 100 projects since the grant programme was introduced in 2012. The projects are led by UK-based small and medium-sized businesses and universities to accelerate the development of innovative solutions to healthcare challenges. Adaptimmune represents one of the companies which have benefitted to date from the £180 million Biomedical Catalyst fund, a programme of public funding jointly managed by the Technology Strategy Board and the Medical Research Council.

Adaptimmune’s existing clinical programme targets a peptide from two cancer testis antigens (CT antigens) called NY-ESO-1 and LAGE-1. Both proteins are expressed in multiple cancers and the company is running studies in the US in multiple myeloma, melanoma, synovial sarcoma and ovarian cancer, with its most recent results reported for multiple myeloma at the annual conference of the American Society of Hematology in December 2013. Details of all current clinical studies can be found on clinicaltrials.gov.