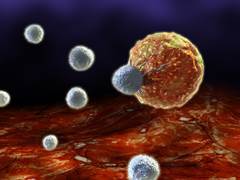 Adaptimmune has released interim results from a Phase I/II clinical trial using patients’ own T cells that have been genetically altered to attack multiple myeloma (MM) cells. The study Chair presented these updated results at the annual meeting of the American Society of Hematology (ASH).

The clinical trial was designed as a single arm open label study where patients are given standard of care (autologous stem cell transplant). This is followed by infusion of a patient’s own T cells that have been genetically engineered to carry receptors that help the T cells recognise and attack tumours, while sparing healthy tissue.

The objectives for the study are to evaluate the safety, bioactivity and anti-tumour effect of infusion of patients’ own T cells that have been genetically modified to express a high affinity T cell receptor (TCR) specific for a type of tumour antigen (protein) known as a cancer testis antigen (CT antigen). The target CT antigens in the study are NY-ESO-1 and LAGE-1. Anti-tumour responses are reported as best response by day 100 following the transplant and T cell infusion.

After 1 year, patients are followed for disease status quarterly, and progression free and overall survival will be collected as the study follow-up matures. Patients are also monitored no less than bi-annually for safety and correlatives specific to the engineered T cells.

Multiple myeloma is a hematologic cancer localised to the bone marrow and is currently incurable in most patients. With standard therapy, long-term response rates are low and the median survival for patients with this disease is 3–5 years.

The clinical study focuses on this unmet medical need and includes patients who have received prior treatment for their myeloma or who have disease considered to be high risk, who are eligible for an autologous stem cell transplant (auto-SCT), and whose tumour expresses NY-ESO and/or LAGE-1. Auto-SCT is the transplant of a patient’s own stem cells, which is a standard of care for treatment of multiple myeloma in the US. Infusion of the gene modified T cells occurs 2 days following auto SCT.

He reports that infusions of engineered T cells have been well tolerated. The overall best response rate at 100 days is 77%. This rate is encouraging in these patients, of whom approximately 50% have high risk disease, 25% have received prior transplant, and NY-ESO expression is associated with poor prognosis.

Of the 20 patients treated to date, 13 have ongoing responses, and seven have progressed. In cases of disease progression, a concomitant loss or reduction of engineered T cells, or a loss of antigen positivity on recurring tumour has been observed. Consequently, the protocol has been modified to allow for additional infusions without concomitant transplant, provided the patient’s tumor continues to express target antigen.

“The clinical responses seen in our patients are encouraging and are generally better than I expected from transplant alone,” says Dr Rapoport, the Gary Jobson Professor in Medical Oncology at the University of Maryland School of Medicine and Associate Director of the Blood and Marrow Transplant Program at the University of Maryland Marlene and Stewart Greenebaum Cancer Center. “I look forward to making this technology available to patients outside of the transplant setting.

Enrollment is nearly completed and a final study analysis in planned to start in late 2014. Interim safety and response data presented at the ASH conference is under preparation for publication in the first half of next year.

“This study has provided us with important insights into the activity of NY-ESO T cells,” said James Noble, Chief Executive Officer of Adaptimmune. “It has been a privilege to work with this translational team and we are encouraged by progress to date on this study and our studies in solid tumor indications.”