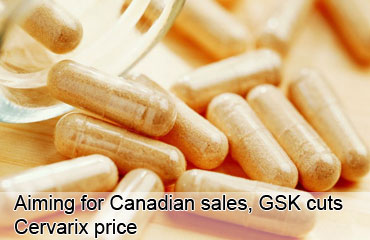 GlaxoSmithKline isn't cutting prices just in the developing world. The drugmaker has slashed the price tag on its cervical cancer vaccine Cervarix by 30 percent in Canada, hoping to boost sales volume there.

The pricing move was prompted by new research that showed the "relatively high price" of cervical cancer vaccines was one reason why most young Canadian women haven't opted to get the shots. Nine of 10 Canadian women aged 18 to 25 have not been vaccinated. That's quite an uptake gap, given that Cervarix has been available since February and Merck's human papillomavirus vaccine Gardasil since 2006. Half of the young women surveyed and 61 percent of mothers said cost was a deterrent.

The list price on Cervarix will come down to $90 per dose from $134.95; three doses are recommended. "We've looked at the research and taken action to address the barrier where we were able to impact the most," GSK's Canadian chief Paul Lucas says in a statement.