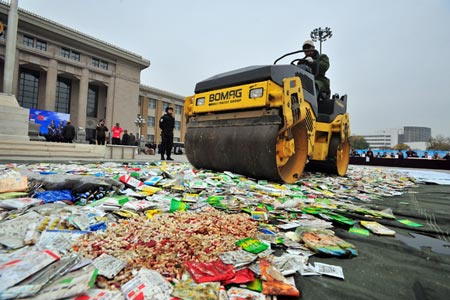 Chinese police have rounded up more than 1300 people nationwide suspected of producing and selling fake medicine, state media have reported.


It said police had shut down 140 illegal websites and online pharmacies in 29 provinces and major cities since June in the crackdown.

The seized fake drugs purported to deal with illnesses ranging from children's colds and flu to heart problems, and had been advertised online.

In July the cabinet's state food and drug administration announced a 6-month nationwide crackdown on the sale of illegal medicine, piling pressure on a sector already reeling from a bribery investigation at the British drugmaker GlaxoSmithKline.

Widespread counterfeit drugs and false advertising have been a thorn in the side of Chinese regulators for years, and the drug agency has conducted campaigns in the past to crack down.

Prosecutions for producing or selling fake drugs or toxic food jumped to more than 8000 in 2012, more than five times the number in 2011, according to a report by China's top prosecutor in March.

Beijing pledged to clean up the medicine sector following the deaths of at least 149 Americans who took contaminated Chinese supplies of the blood-thinner heparin in 2008.

But the country's complicated and still developing regulatory environment has stymied efforts at tackling the problem, which infuriates Chinese consumers, who also express anger at what they see as the high price of legitimate medicine.