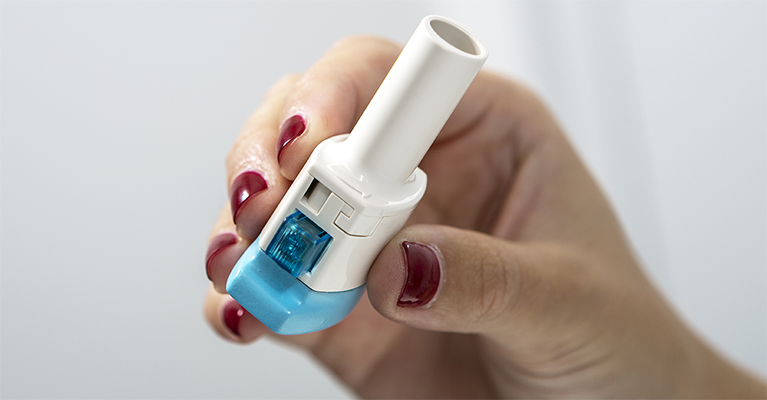 With inhaler use notoriously prone to user error, any clinical study that involves self-administration via an inhaler is challenging from the outset. Help is at hand, however, with a simple-but-smart device developed by Cambridge Design Partnership

“So many things can go wrong when an inhaler is used to deliver a dry powder formulation, it is almost easier to say when the process might occasionally go right,” says David Harris, leader of respiratory drug delivery for Cambridge Design Partnership.

“With capsule dry powder inhalers (cDPIs) in particular, the whole process is fraught with error. Users often don’t pierce the capsule, so the drug doesn’t come out. Or they swallow the capsule like a pill and ignore the inhaler altogether. And, of course, the common mistake is that they simply don’t inhale strongly enough and only receive a partial dose. It’s a minefield.

”It is into that minefield that CDP has ventured, with the aim of improving the quality of clinical study data for the humble cDPI. David explains: “Many clinical studies with dry powder formulations are conducted using the standard Plastiape RS01 inhaler, which is susceptible to all of the issues mentioned earlier. So we set about creating an electronic module that can connect to the inhaler and provide valuable data on how successfully the drug is administered.

Elegantly simple, yet extremely effective, the quantii™ system attaches to a standard, unmodified Plastiape inhaler and records or relays a wealth of information every time the inhaler is used. This essential data is delivered via Bluetooth to an app, explains David Harris: “Information gathered in this way includes accurate measurement of the inspiratory flowrate profile, which can reveal whether the user was inhaling strongly enough, together with other useful parameters, such as ramp-up rate and total inhaled volume.

“The quantii™ module also detects the spin rate of the capsule and can determine if and when the capsule has emitted the drug, as an empty capsule spins at a different rate to a full or half-full one.

”Such data is gold dust to clinical studies, as David explains: “Phase III respiratory clinical studies often involve thousands of patients administering drugs via inhaler, without any supervision. It is little surprise that such tests throw up so many outliers that the data becomes questionable – and lacking in statistical power. For proven Plastiape device there has been, until now, no way of effectively quantifying whether this is due to errors in the inhaler use.

”The quantii™ system also supplies data on the duration and time of use, and the orientation during use. “It all adds up to an effective way of making a Plastiape inhaler much more reliable for clinical studies,” says Bastiaan de Leeuw, CDP’s head of business development for drug delivery.

It is fair to say that some industry outsiders might wonder why the Plastiape inhaler is used at all for clinical studies, given its error-prone reputation. This is because it is currently the only freely available delivery platform, says David Harris. “The Monohaler, which is essentially what the latest Plastiape device is, was first devised around 40 years ago. It is robust, affordable, uses standardised primary packaging - and has sold hundreds of millions of units worldwide. For clinical studies, the Plastiape RS01 is a mature and well-proven solution that has passed all the necessary regulatory tests and is ready to go.

”Bastiaan de Leeuw foresees that the combination of the Plastiape inhaler and the new quantii™ system could become a game-changer in clinical studies with powder formulations, as “the quantii system attaches to the Plastiape inhaler in a non-invasive way, so you need minimal validation before starting your clinical study. It’s a simple and swift way of dealing with the problem and obtaining reliable data.”

Indeed, as Bastiaan says, the addition of the quantii™ system takes the guesswork out of clinical studies, maximising the chance of success. “Billions of dollars are invested every year in clinical studies for new respiratory therapies and much of this cost is wasted due to poor and inconclusive data.“Unfortunately, many potentially life-saving new products never make it into the hands of patients. They fail in the clinic due to user error and non-adherence – and there is usually no evidence available to remove these spurious outlying data.”

Even in monitored studies, without a quantii™ system only a qualitative assessment of correct inhaler technique has been possible. In Phase III studies, which are often unsupervised, the only chance to explain outlying data has been to rely on entries in the Case Report Forms.

“The quantii™ research service really is a solution whose time has come,” says David Harris. “We are very proud of it and look forward to seeing its launch and roll out over the coming months.”

The quantii™ system will be showcased on stand 11.0B32 at Innopack conference in Congress Center Messe Frankfurt on November 5-7.