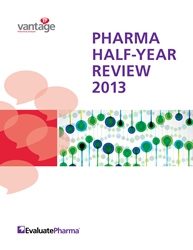 Despite a positive start to the year characterised by healthy IPO activity and free-flowing venture capital, licensing deals, the life blood of the industry, have stalled, signaling that rising valuations could be pricing buyers out of the market. The industry now faces the second half with cautious optimism regarding its ability to sustain some of the buoyancy seen in the first half, according to the newly released, “Pharma Half-Year Review 2013” report from Evaluate’s editorial arm, EP Vantage. The report, based on data from EvaluatePharma, is available for download at www.evaluategroup.com/PharmaHalfYearReview.

Of note in the first half of 2013 was exceptional growth in the Nasdaq Biotechnology Index, a key valuation metric of small and medium-sized companies. The Index exceeded its previous record of 1,596.93 set 13 years earlier, growing 27%t through 30 June — nearly equal to its growth for all of 2012. The Dow Jones US Pharmaceuticals Index showed similar gains at 21%. Compare this with the gains of 14% and 13% for the Dow Jones Industrial Average and S&P 500 respectively, and the amount of investment rushing into the pharma sphere becomes even more apparent.

However, not all areas of the industry were quite as bright. Although venture financing and M&A activity picked up, the industry will continue to fall short of the M&A activity that preceded the patent cliff. In addition, licensing activity remains low now that high valuations raised many sellers’ expectations out of realistic territories.

“Despite the encouraging signs that have emerged recently, there are still deep seated issues to deal with, such as productivity, reimbursement and proving the value of products to payers,” said Lisa Urquhart, EP Vantage editor. “How well the industry performs during the next 16 months as it seeks to extend the lifecycles of important franchises or build up new classes of medicines will go a long way towards determining whether the current optimism is sustained, or if another bust is hiding just beyond this boom.”

Key findings of the “Pharma Half-Year Review 2013” report include the following:

•         IPO activity continues to increase as 20 companies floated in the first half of the year raising $1.28 billion between them.  Only 16 companies completed IPO’s during the whole of 2012.

•         The industry raised $2 billion in venture finance during the first half of the year with two thirds of the total coming in the second quarter.

•         US product approvals have nearly matched the encouraging pace of 2012, with 17 approved by 30 June.  Should the remaining 29 small-molecule therapies and nine biological agents make it to the market this year, projected 5-year US sales will reach $16.3 billion, above the $15.9 billion projected from 2012.