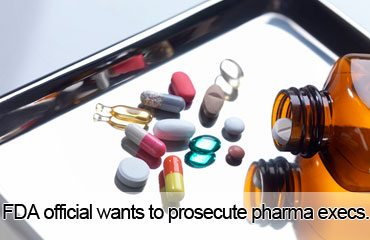 Pharma execs may be criminally prosecuted for off-label marketing violations.

FDA to pharma: Review your marketing to make sure it's not breaking the rules, or else. In the second heads-up from an agency official since March, FDA Deputy Chief Eric Blumberg said yesterday that pharma execs may be criminally prosecuted for off-label marketing violations.

Big settlements with the Department of Justice aren't cutting it, Blumberg said. Take Pfizer--after settling claims that it had mismarketed the epilepsy drug Neurontin, the company promised the government to stay between in the lines. Then came Bextra (and three other drugs). The company last year agreed to pay a record-setting $2.3 billion to settle claims that it marketed the drugs for off-label uses. The settlement was so large in part because Pfizer was a repeat offender, prosecutors said at the time.

"It's clear we're not getting the job done with large, monetary settlements," Blumberg told a conference audience. "Unless the government shows more resolve to criminally charge individuals at