The invention could pave the way for treatments to cure Parkinson's and Alzheimer's disease.

Researchers from Hong Kong Baptist University (HKBU) have invented a nanostructure that can stimulate neural stem cells to differentiate into nerve cells.

Although current treatments cannot cure Parkinson's disease completely, stem cell therapy a promising potential treatment. It involves cultivating stem cells for differentiation into new and healthy cells, tissues or organs which can then be transplanted to human body to replace damaged or dead cells.

Conventional stem cell culturing techniques require a large number of additional growth factors in a culture medium. The chemicals used may stimulate the growth of cancer cells and increase the risk of developing tumours after transplantation to human body. Furthermore, the brain‐like structures obtained from this method usually poorly resemble their counterparts in the brain. Efficiency of the conventional culturing techniques is low as the process spans more than a month, resulting in a high risk of contamination.

The pioneering nanomatrix, developed by a research team led by Professor Ken Yung Kin-lam, Professor of the Department of Biology and Dr Jeffery Huang Zhifeng, Associate Professor of the Department of Physics at HKBU, can induce the rapid and specific differentiation of neural stem cells into miniature substantia nigra-like structures (mini-SNLSs). These mini-SNLSs mainly comprise dopaminergic neurons and they can replace the damaged or degenerated cells in the substantia nigra in the brain.

The nanomatrix consists of a silica plate coated with a nanostructure layer. Thickness of the nanomatrix is only 550–730 nm, yet there are trillions of nanozigzag structures on the surface which can initiate the growth of neural stem cells into mini-SNLSs without the use of chemical growth factors.

"When the neural stem cells come into physical contact with our tailor-made nanozigzag matrix in vitro, the 'physical massage' can induce the cells to differentiate rapidly into the desired dopaminergic neurons. A self-organised mini-brain-like structure can be developed in only 2 weeks with risk of carcinogenesis substantially reduced," said Dr Huang.

According to Professor Yung, the technology "lays the foundation for research into stem cell therapies that may ultimately cure Parkinson's disease." He also believes the invention has shown great potential for the treatment of other incurable diseases, such as Alzheimer's disease and certain types of cancer.

The CRO will undertake this clinical trial at multiple sites worldwide, starting at the AZ Sint Maarten hospital in Mechelen, Belgium.

The company began scaling up manufacturing of REGN-COV2 at business risk earlier this year to ensure the immediate availability of the product if clinical trials prove successful.

AJILITY is designed to speed novel or existing therapeutics from development to manufacturing and into the clinic.

The CDMO will work on developing a solution and a solid oral dosage form of ViralClear's merimepodib.

Optimizing the dosage form's efficiency reduces the amount of drug required in each patch.

The company will provide CDMO capabilities, capacities, and expertise to support the US government’s Warp Speed Program to pave the way for innovators to advance COVID-19 programs.

Researchers endorse a switch from the current first-filer system in the US to a system that instead rewards the first successful challenger. 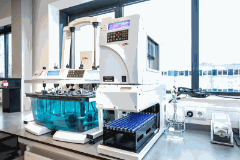 SeraNovo enters into a second license agreement with Carna Biosciences for development of oral formulation of Carna’s kinase inhibitor.