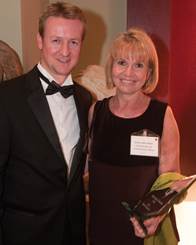 This is the second award received by Immunocore in a matter of weeks and follows the company’s listing in the Fierce Biotech top 15 private biotech firms globally.

The judges commented on Immunocore’s success in securing these multi-target partnerships with GSK and with Genentech. Each partnership involves several target programmes, each of which could result in more than £200 million in development and commercial milestones plus significant royalties.

Immuncore’s world-leading platform of bi-specific biological drugs, called ImmTACs (Immune mobilising mTCR Against Cancer), exploit the power of T Cell Receptors (TCRs) to recognise intracellular changes that occur during cancer or viral infection. This unique recognition ability of TCRs sets them apart from traditional antibody-based therapies that can only recognise changes on the surface of cells, and provides, for the first time, the ability to develop extremely potent targeted therapies for cancers that are poorly served. A particular feature is that the ImmTACs can be directed to target and destroy only the cancerous cells, avoiding damage to healthy cells.

The most advanced ImmTAC drug, IMCgp100 for the treatment of melanoma, is in Phase I/II clinical trials in the UK and US.

James Noble, Chief Executive Officer of Immunocore, commented: “We are delighted to win the Best Biotech Dealmaker Award against strong competition. This accolade recognises the hard work of our highly skilled team in developing our technology and in executing two significant partnership agreements, enabling us to collaborate with world-leading pharma companies to develop new treatments for cancers.”

The OBN annual awards celebrate the achievements and major success stories in the UK bioscience sector in raising funds, executing deals and supporting innovation. A complete list of award winners is available at www.obn.org.uk