Home International Multidisciplinary Course on Iron Deficiency 2018: the results of the 6th edition

International Multidisciplinary Course on Iron Deficiency 2018: the results of the 6th edition

On April 13th and 14th Lisbon was the scene of the sixth edition of the International Multidisciplinary Course on Iron Deficiency (IMCID), organized as every year by PharmaNutra SPA in collaboration with Zambon, the company’s trading partner in the Iberian Peninsula markets. Among its participants, the Congress saw experts doctors and researchers from more than 20 different countries, confirming the real international dimension of the event.

As pointed out during the event by Prof. Manuel Muñoz from the Department of Surgery, Biochemistry and Immunology of the University of Malaga, anemia is one of the most widespread diseases in the world and more than 50 percent of cases are due to iron deficiency. Oral treatment of iron deficiency can be problematic for many patients, who are unlikely to tolerate iron intake and are forced to resort to intravenous intake. In this context, Sucrosomial Iron® represents a real innovation, because despite being an oral formulation, it demonstrates higher tolerability and bioavailability compared to traditional irons. The results of scientific researches and clinical studies presented during the sixth IMCID, have amply demonstrated how Sucrosomial® technology represents a real innovation for both patients and doctors.

Until only a few years ago, the Congress was mainly designed for oncologists and nephrologists, this time it not only saw exponentially increasing the number of participants, but also the medical specialties involved, such as gastroenterology, cardiology and Patient Blood Management (PBM). From a scientific point of view, the multidisciplinarity of the interventions in this edition of the IMCID is probably the main feature of the event. According to Germano Tarantino, Scientific Director of PharmaNutra SPA, the sharing of experiences and knowledges related to different medical contexts in which iron deficiency anemia is more frequent, has allowed the participating researchers to have a new point of view on the pathology itself and on the important role of Sucrosomial Iron®.   Carlo Volpi, COO of PharmaNutra SPA, highlighted the interesting parallel between the evolution of the Congress, which in recent years has become an international event, and the growth of PharmaNutra SPA in foreign markets.   Surely this sixth edition of the International Multidisciplinary Congress on Iron Deficiency has underlined the fundamental importance of research and scientific evidence at the core of Sucrosomial® technology and SiderAL® products. The same research that allowed PharmaNutra to grow internationally and to obtain credibility and support from numerous experts from the medical-scientific field. 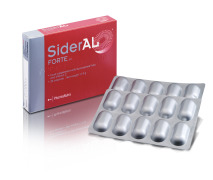 Sideral is a nutritional supplement that contains Sucrosomial® Iron (Sideral® r.m) and vitamin C, aimed at treating alimentary deficiency or as a complement when higher organic levels of these nutrients are required.