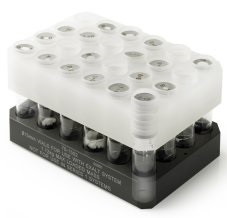 eXalt has found application in labs that perform tasks including first time crystallisation of amorphous forms, recrystallisation of samples which have only a few known forms, removing a hydrate, solvent screening studies to find the most suitable conditions to take forward in development, high throughput co-crystallisation screens and studies to confirm stable isoforms.

eXalt enables a wide range of solvents and multiple actives to be evaporated all at the same slow rate, and under the same conditions, giving the user unprecedented control of the crystallisation process. This is achieved using a special holder which allows a can be configured to slow the evaporation rate each solvent; that is, the more volatile solvents are impeded more, and some solvents such as water, need no restriction. The holder is then placed in the controlled conditions of a Genevac HT Series Evaporator which cycles the pressure over the samples to create a draw, achieving controlled, even evaporation. eXalt holders can accept up to 24 different samples, and 4, 8 or 12 holders can be placed in the evaporator, depending on size.

To review a web presentation summarising eXalt technology, how it works together with some user experiences and results, click here.