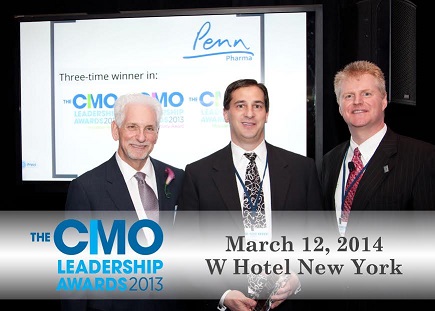 In 2013, Penn Pharma won three of the five possible CMO Leadership Awards for Innovation, Productivity and Regulatory and this year were entered into the newly introduced Best in Class Award for Innovation. Penn became eligible for this new award after receiving the highest perception score in this important category.

The awards, set up by Life Science Leader, were developed in response to the difficulties their readers encountered when vetting CMO partners. It recognises companies who achieve the top 20 percentile in perception scores.

US Business Development Executive, Mike Miller attended the event said: “It was an honour to be invited to participate in an evening that recognises superior performance in the CMO industry.”

Penn Pharma Chief Executive, Richard Yarwood added: “We pride ourselves on our commitment to innovation and to be recognised as Best in Class in this category proves that our hard work is being recognised.

"To be entered into these awards based on customer feedback is a great achievement and knowing that we are recognised for our innovation only strengthens our desire to continue to lead new developments in our industry sector.”

Vice President of Publishing, Life Science Leader, Jon Howland said: "The CMO Leadership Awards are a data driven award taking input from over 10,000 customers of CMO services. The Industry Choice Award recognizes the companies that these customers view as being the best in the respective categories. We congratulate the employees of Penn Pharma for being recognised with that honour."