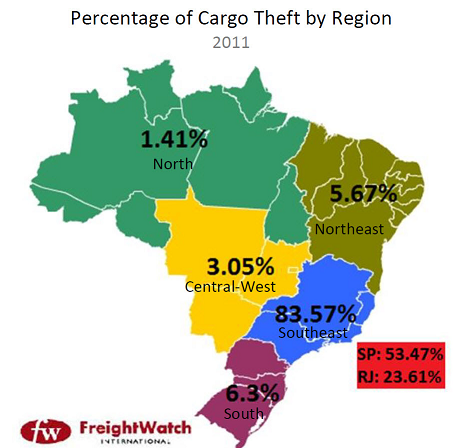 Brazil's Sao Paulo legislative assembly has passed a bill to tackle the problem of cargo theft in the state.

The significance of the problem was described in a previous Rx-360 Flash Report.

The bill (885/2009) — which now goes to the state governor for either signature — introduces penalties for the sale or receipt of stolen goods including the cancellation of registration in the ICMS, a tax system governing interstate commerce. In effect, loss of registration means that a company can't operate. The bill also introduces fines equal to twice the value of the stolen products.

João Caramez, chair of the assembly's Committee on Transport and Communications, noted there were about 15,000 cargo thefts throughout Brazil in 2012, of which more than 7000 occurred in Sao Paulo.

"Approval of the law is important as it is not enough just to arrest the thief; receivers of stolen goods have to be punished as well because they encourage crime," he said.

"Pharmaceuticals stolen in Brazil are often reintroduced into the marketplace through both legitimate stores and the black market," says Freightwatch, which expects the sector to come under increased risk of thefts as the country's $25 billion pharmaceutical market continues to grow.

In the first 10 months of 2013 there were 229 thefts, with Sao Paulo accounting for around 60% of the total, according to the report, which estimates the total value of goods stolen at around $442 million.