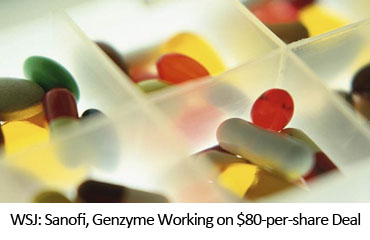 Sanofi-Aventis and Genzyme are debating their terms for a transaction which analyst believes has a chance of being reached before before Jan. 21 when Sanofi's current offer expires.

Finally, Sanofi-Aventis ($SNY) and Genzyme ($GENZ) are actually talking about a deal. After six months of dancing around their difference in price--and at least two months of hints about adding contingent value rights to the mix--the two companies are debating their terms face-to-face. Sanofi issued a statement emphasizing that the two companies aren't even close to an agreement yet. But still, the fact that actual company executives are actually negotiating is a step forward.

Price has been a sticking point ever since Sanofi pitched its initial $69-per-share offer for Genzyme. The Boston company has consistently rebuffed that offer and urged shareholders to do the same when Sanofi went hostile.

But a glimmer of potential agreement appear