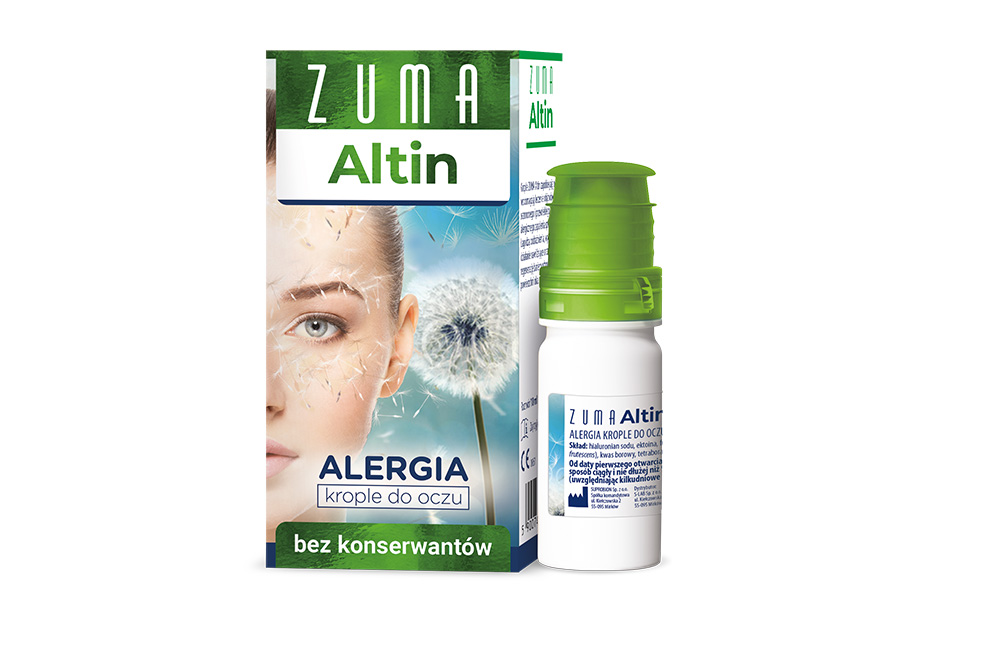 What are ZUMA Altin drops?

What are ZUMA Altin drops used for?

ZUMA Altin drops prevent and support the treatment of symptoms of seasonal and chronic allergic conjunctivitis. They soothe irritations, have a moisturizing effect and support the regeneration of the protective barrier of the eye surface.

When should ZUMA Altin drops be used?

ZUMA Altin drops should be used in case of eye irritation caused by allergens, i.e. pollen, dust mites, animal hair or mold. Thanks to the unique combination of four active substances, the drops both intensely moisturize and quickly soothe the bothersome symptoms of allergic conjunctivitis (i.e. redness, itching, burning or watery eyes).

How do the active ingredients of ZUMA Altin drops work?

Sodium hyaluronate - a naturally occurring polysaccharide in the human body, including the vitreous body of the eye, is commonly known as a highly moisturizing substance. The mucoadhesive properties of hyaluronic acid ensure better adherence of the preparation to the eye surface, which contributes to faster healing of the corneal epithelium, and thanks to the viscoelastic (viscoelastic) properties, it increases the stability of the tear film, which is washed out much slower during blinking.

Ectoine - a natural substance produced in the fermentation process by microorganisms living in extreme environmental conditions - extremophiles. Ectoine belongs to substances with hygroscopic (water binding / moisture absorption) and osmoprotective properties, thanks to which it moisturizes the surface of the nasal mucosa, protects epithelial cells and stabilizes cell membranes. Stabilization of cell membranes, and consequently enhancement of tissue barrier function, may reduce allergen-membrane interactions and alleviate symptoms caused by inflammation.

Fucoidan - is a sulfonated polysaccharide of natural origin, which is part of the cell membranes of brown algae of the fucus type (Fucus) and aquatic animals (e.g. sea cucumbers and sea urchins). It is thanks to her that the seaweed does not dry out during low tide and does not die under the influence of the sun. The mucus with which they are covered also provides them with comprehensive protection against the harmful effects of external factors. Fucoidan is known to be used as a moisturizing, hydrogel forming and humectant component. The various directions for the use of fucoidan in ophthalmology are being intensively researched and developed.

Perilla frutescens - is an annual oil plant from the Lamiaceae family. It exhibits a number of properties - from moisturizing to soothing the symptoms associated with the occurrence of an allergic reaction in the mucous membranes.

Who are ZUMA Altin drops intended for?
ZUMA Altin eye drops are dedicated for children over 6 years of age and adults.

How much to use ZUMA Altin eye drops?

It is recommended to instill 1 drop 3 times a day into the conjunctival sac of each eye. With severe ailments, you can apply more often.

show all 26 other products