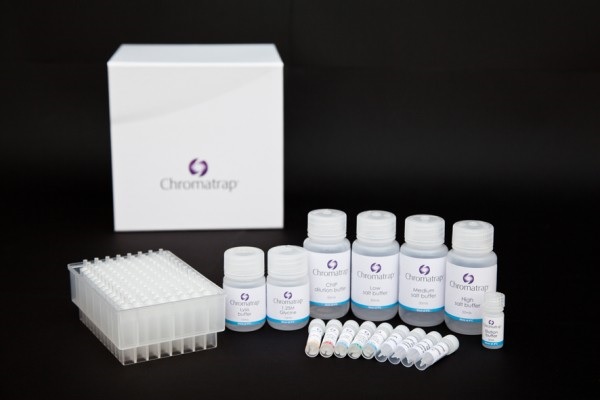 The Chromatrap 96 HT is a new high throughput ChIP microplate based on the novel spin-column ChIP technology. It is essentially 96 separate Chromatrap spin-columns in one device designed to enable researchers to perform up to 96 ChIP experiments in parallel. Assays can be performed either by using hand-held multichannel pipette or by using automated liquid handling robots for even higher throughputs.

The volume and dimensions of the wells in the microplate are very similar to that of the established Chromatrap Spin-columns so the optimised spin-column protocol forms the basis of the approach to performing high throughput ChIP analysis in microplates. Each well has its own porous disc at the bottom in which protein A or protein G has been covalently attached. The functionalised discs have the same chemistry and stoichiometry as the spin columns so all of the reagent volumes and timings can be directly inferred from the spin-tube protocol. The microplate is supplied with a close fitting collection plate to recover the retained chromatins at the elution step.