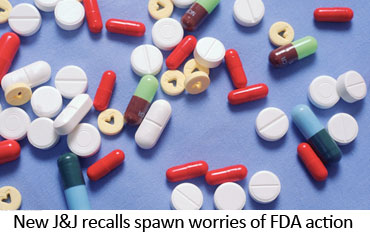 The steady drumbeat of downbeat manufacturing news and recalls has heightened worries among market-watchers.

More recall news on the Johnson & Johnson ($JNJ) front. The company has quintupled the size of its previously announced contact-lens recall, and it announced a new one involving more than a dozen different Mylanta and AlternaGEL over-the-counter gastrointestinal meds. This latest drug development stems from a labeling omission, similar to last week's Tylenol Cold recall.

This brings J&J's recall tally to a dozen-plus, covering at least 70 different products; the company has been plagued by particulates, musty odors, labeling snafus and general plant mismanagement. The most recent recalls appear to be prompted by the company's review of its manufacturing processes, which in turn was prompted by the massive children's drug recall in May. That recall also led to the shutdown of McNeil Consumer Healthcare's Fort Washington, PA plant, for a makeover.

To get its manufacturing woes in check, J&J also has rearranged management to more closely supervise qualit