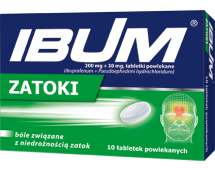 Indications:
The  drug is indicated for temporary use to alleviate the symptoms of blocked nose and nasal sinuses with headache and pain caused by blocked sinuses, and to relieve fever associated with flu or common cold.

Contraindications:
The medicinal product is contraindicated in patients: hypersensitive to ibuprofen or pseudoephedrine, or any other excipients, with a history of allergic reactions such as rhinitis, urticaria or bronchial asthma following administration of acetylsalicylic acid or other non-steroidal anti-inflammatory drugs (NSAID), with a history of, or existing stomach and (or) duodenum ulceration, perforation or bleeding, also associated with NSAIDs, with haemorrhagic diathesis, severe hepatic failure, acute kidney injury or severe heart failure, during pregnancy, lactation, concurrently taking other non-steroidal anti-inflammatory drugs, including COX-2  inhibitors (increased risk of adverse events), with severe cardiovascular disorders, tachycardia, arterial hypertension, angina pectoris, with urinary retention, hyperthyroidism, narrow angle glaucoma, with a history of intracerebral haemorrhage or the related risk factors, e.g. as a result of taking vasoconstrictor drugs or other decongestants, administered orally or nasally.