Xi'an Deli Biological Chemical Co Ltd was established in July, 1999. This company is a high-tech enterprise specialized in R&D of new pharmaceutical excipients, productions and sales. In 1997, the core technology was identified by the Scientific Committee of Shanxi Province, and it was considered to fill critical technological gaps in China and reach the international advanced level. In 2000, the company received free financing of 700 thousand Yuan RMB as innovation fund for technology SMEs from Ministry of Science; in 2001, the main products of the company—HP─β─CD project has been included into the Torch Plan of Xi’an, and HP─β─CD has passed the technical review of the State Drug Administration (SDA) as the first class I pharmaceutical excipients at the same year. HP─β─CD was approved for clinical trial on 14th September, 2002 (Approval NO. 2002FL0001). We applied to SFDA for declaration for production on 23rd July, 2007. Center for Drug Evaluation of the State Food and Drug Administration finished technological review on 23rd January, 2009, and submitted for approval from the State Food and Drug Administration. New drug certificate (certificate NO.: Chinese medicine certificate F20090001) and drug registration approval documents (Approval No. 2009S00608) were issued, and drug approval number was obtained (Chinese medicine certificate F20090001). The production area of the company is 2620m2, and the area of production site is approximately 400m2. Currently, the company possesses a production line and related devices with annual (HP-β-CD) yield of 100 tons. No source of pollution around the production area, and the workshop is featured with 100,000 purification area and general production area depends on the requirement of the production process. 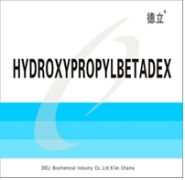