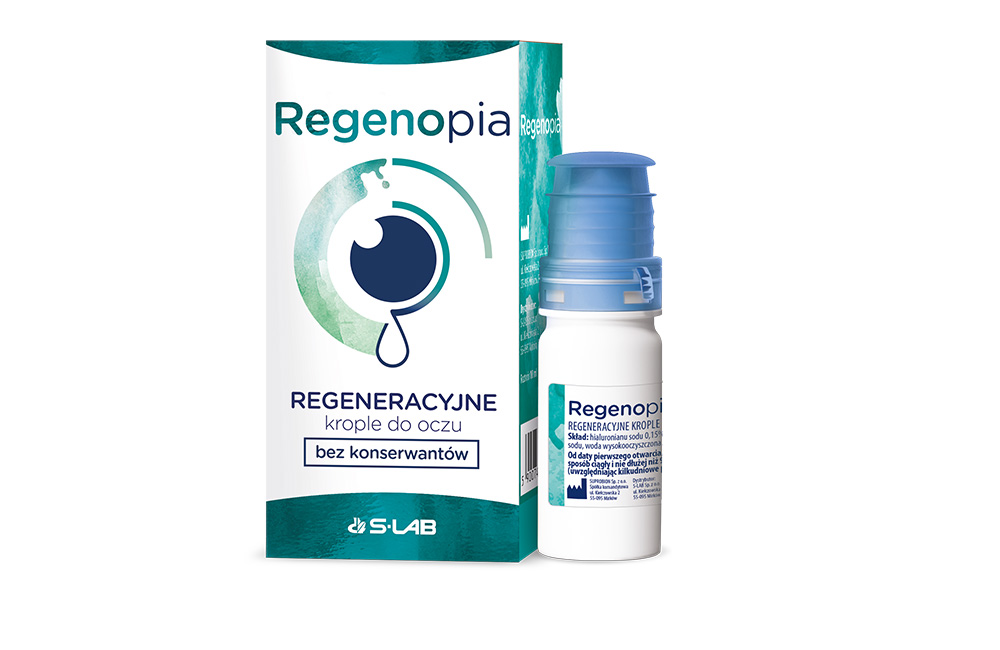 What are Regenopia eye drops?

The unique combination of three active substances contained in Regenopia eye drops: sodium hyaluronate, trehalose and D-panthenol effectively moisturizes and supports the regeneration of the protective barrier of the eye surface. After instillation, the product provides a feeling of long-term comfort.

What are Regenopia eye drops used for?

When should I use Regenopia drops?

Regenopia drops should be used in conditions of discomfort, accompanied by symptoms such as: eye dryness, burning or tired eyes, which may be caused by:

• surgical procedures (including laser ones) that interfere with the processes of secretion and proper distribution of the tear film on the surface of the eye.

How do the active ingredients of Regenopia eye drops work?

Sodium hyaluronate - a naturally occurring polysaccharide in the human body, including the vitreous body of the eye, is commonly known as a highly moisturizing substance. The mucoadhesive properties of hyaluronic acid ensure better adhesion of the preparation to the eye surface, which contributes to faster healing of the corneal epithelium, while thanks to the viscoelastic (viscoelastic) properties, it increases the stability of the tear film, which is washed out much slower during blinking.

Trehalose - is a non-reducing disaccharide composed of glucose units, naturally occurring in many living organisms such as plants, insects, fungi and bacteria. It has been identified as a key component of survival under stress related to anhydrobiosis (almost complete dehydration). Due to its strong protective properties, trehalose has been used in ophthalmological preparations as a substance preventing the stress associated with dehydration of the eye surface, which is a consequence of, among others, dry eye syndrome.

D-panthenol - is an alcohol analog of pantothenic acid, also called pantothenate or vitamin B5, which is a water-soluble vitamin. Due to its hygroscopic properties and the ability to retain moisture, the topical application of D-panthenol may improve hydration, the effect of which is related to the ability to regenerate the protective barrier.

How to use Regenopia eye drops?

show all 26 other products