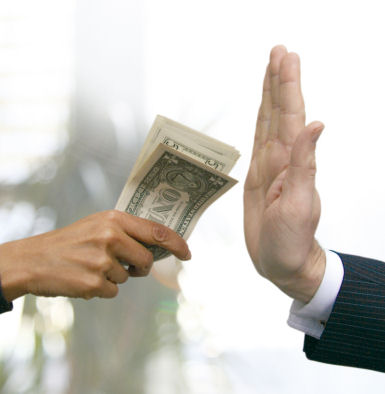 Cash gifts, entertainment, charitable donations, consultant arrangement or just about any payment or favor extended with an objective to promote a pharma product has become a marketing tactic. And that is what needs regulation.

In August, Eli Lilly emerged as the fifth company embroiled in the China bribery scandal, joining the list with GSK, Novartis, Sanofi and Baxter International. During the last 60 days, Chinese media, most notably 21st Century Business Herald, the business newspaper from the Nanfang Media Group, has been running a series of exposes with unnamed whistleblowers highlighting the gross irregularities in the inner workings of large pharma companies in China.

Graft in China is a pervasive reality. Recent a high profile trial of a former top politician, Bo Xilai, is testimony. He was tried for embezzlement, bribery and abuse of power. During his swift 5-day trial that ended with declaration of sentence pending, very few disclosures of the names and companies went public. Following soon after the once-in-a-decade leadership change in China that took place in March, this year, installing Li Keqiang as prime minister and Xi Jinping as the president, there does seem to be a corruption-crackdown drive on in the country. However, the pharmaceutical industry anti-corruption drive has been on since at least five years.

In 2007, former head of China Food and Drug Administration, Zeng Xiaoyu was given execution sentence for accepting bribes from eight companies and dereliction of duty in approving hundreds of drugs. China had demonstrated its seriousness in ensuring consumer safety with this. In 2011, Wu Jianwen, former president of state-owned Shanghai Pharmaceutical was awarded suspended death sentence with a 2-year reprieve for taking bribes close to $2 million and embezzling $5 million while procuring raw material for the company.

Systemic corruption is deep rooted in China but at the same time the upside of a large vibrant market is so high that no company would stop doing business in China and with China. So, there are all these companies from the West who have taken the strategic risk of dealing with China and its 'red envelope market practices'. Still another reality is the 'business practices' in the pharma industry itself. Cash gifts, entertainment, charitable donations, consultant arrangement or just about any payment or favor extended with an objective to promote a pharma product has become a marketing tactic. And that is what needs regulation.

In that light, this current crackdown on pharma in China is an enforcement drive that makes a case for self-regulation and adoption of anti-corruption practices by the companies. And it is related to the similar enforcement drive in the US. Numerous pharma and medical devices companies are being investigated for violations of Foreign Corrupt Practices Act (FCPA) in the US. In 2009, the US Department of Justice (DoJ) had warned the industry that it is watching and the companies should enforce compliance.

The FCPA covers these inducements given to doctors and healthcare professional to promote products anywhere in the world. Besides, not only FCPA's definition of foreign official is expansive, its definition of the companies that US can take up for investigation is also very wide, even tenuous links with US industry qualify. And China is one of the top geographies where US wants to ensure FCPA compliance. Besides, China being a signatory to OECD's anti-bribery convention of 2009 has to comply and ensure healthy international business environment. Pharma industry now needs to play by anti-corruption rules.